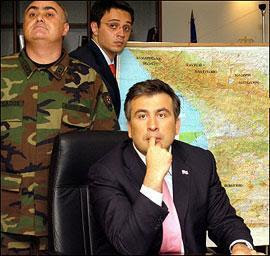 by Peter Lavelle
The “Warlord of the Caucasus” – Mikhail Saakashvili – claims his motorcade was fired upon by “Russians” close to the new international border of South Ossetia. Polish President Lech Kaczynski was part of the Saakashvili assembly. The motorcade turned around and later Saakashvili held a presser with Kaczynski and again almost broken down in tears relating his tale.
What is wrong with this picture? Well quite literally the “pictures” tell us nothing. The Georgians released video footage that only shows confusion and emotion, but for all we know the commotion was over a flat tire – not an assassination attempt. Sadly we have all gotten used to Saak’s media manipulation. He is the Georgian boy who can’t help but call wolf to stay in the media spotlight.

Oh, by the way, it is the fifth anniversary of the so-called “Rose Revolution.” For those of us who have seriously followed events in Georgia, we are reminded all that is left of this revolution are thorns, lies, repression, and willful Western conceit. (The commentariat is too slow and lazy, too stupid, or too ideologically driven to look at the larger picture of this country and region).Ok, let’s consider Saak’s claims. Why now? And who gains what?
Because of the lies and disinformation generated over the years by Tbilisi and Western PR firms in its service, the whole thing most probably is a hoax. The only thing “shot” was a bad “wag the dog” video.
Let’s assume shots were fired close to the motorcade. There is no evidence proving who fired. Given the Saak’s flip-flops related to the South Ossetian conflict, Tbilisi’s word means nothing. But if shots were fired, I believe they were intended to impact public opinion.
Keep in mind that the EU-brokered ceasefire is still in effect – there are EU monitors on the ground. Why did Saak have a large motorcade and security detail move so close to South Ossetia’s border? Obviously the South Ossetians (if they are the ones who fired) interpreted this as more than a provocation. They have no reason to trust anything coming out of Tbilisi after experiencing almost two decades of ethnic cleansing at the hands of the Georgians.
Also, why would Saak have the Polish president with him on this dangerous visit? Again, was it all a hoax? Or was Saak willing to put the life of the Polish at risk to generate political capital? Well Saak has done far worse – he attacked and killed South Ossetians in cold blood as they slept. (Don’t get me wrong, I wouldn’t miss Lech Kaczynski for a second if he suddenly departed from the world).
My sense is that Kaczynski was part of the hoax – if this was the plan. He likes to speak like a lion defending “European values,” but in reality he is a small-minded Polish nationalist mouse. In every Polish election since 1991, he has played the anti-Russia at home and continues to do so to divide the EU to his advantage. It is no coincidence he was the sole EU leader standing next to Saak during the fifth anniversary of the Rose Revolution in Tbilisi.
Then there is another variant to all this – it was the Georgians who accidently fired at the motorcade. Georgian lawmaker Marika Verulashvili told the Associated Press as much. This sounds like folly. But, then again, this is very much part of the storyline in what is part and parcel of Saak’s regime.
As for any Russian involvement in the bizarre affair, give the following a thought: Russia’s political establishment despises Saak – he murdered Russian peacekeepers and Russian passport holders. As far as the Kremlin is concerned, he is a political corpse. But the Kremlin has no interest in killing him. It is a lot more interesting to watch him commit suicide.
I have upgraded or downgraded Saak, depending on how you want to look at it, to “Saako.” Is there no limit to insulting our intelligence? The answer is no – just watch RT’s competitors! Crapping Network News still takes Saako seriously……
Gönderen CW zaman: 01:01