The ex-defense minister of Abkhazia Sultan Sosnaliev (Kabardian) passed away 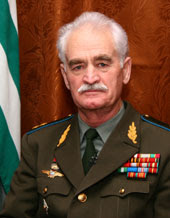 After a severe illness on the night of Sunday in Moscow, passed away on the ex-defense minister of Abkhazia, Lieutenant-General Sultan Sosnaliev.
Abkhaz President Sergei Bagapsh expressed his condolences to the family Sosnalieva reported in the press service of the Abkhazian government.

Sultan Sosnaliyev (Kabardian) was born in Baksan in Kabardino-Balkaria. He graduated at the Syzran aircraft school and from the Zhukov anti-aircraft military academy and served in the Soviet anti-aircraft forces for 29 years. He retired in 1990 as rank of a colonel and worked in Kabardino-Balkaria's construction industry till 1992.
Sosnaliyev became the head of the military department of the newly-formed Confederation of Mountain Peoples of the Caucasus. After the beginning of the War in Abkhazia he arrived to Abkhazia with the group of Kabardin volunteers through on 15 August 1992. He was appointed the head of the staff of the Gudauta-based State Committee of the Defence and was one of the planners of the victorious Battle of Gagra.
He was appointed the minister of defence in April 1993 and later awarded the rank of major general. Sosnaliyev and Sergei Dbar planned the July and September Sukhum offensives. On 24-25 March 1994 Sosnaliyev was in charge of the last operation of the war - capture of the village of Lata in the Kodor Valley.

Sosnaliyev resigned in July 1996 and returned to Kabardino-Balkaria. After Sergei Bagapsh had been elected the President of Abkhazia he offered the office of the minister of defence to Sosnaliyev as "reforms were desperately needed" in the Abkhazian army. The latter agreed and served in the Abkhazian government as a minister of defence and a vice-premier till May 2007. He was ex vice-president of the International Circassian Association.
Gönderen CW zaman: 16:42