The New York Times, MOSCOW — Sergei V. Bagapsh, who led the Black Sea enclave of Abkhazia through a tumultuous effort to gain independence from Georgia without being absorbed by Russia, died Sunday in Moscow. He was 62.
Mr. Bagapsh had successful surgery to remove growths on his lung on May 21, but succumbed to complications that ended in heart failure, medical officials told the Interfax news service.
The affable manner of Mr. Bagapsh, who governed Abkhazia as its president, concealed the strategic thinking of a chess player, a quality he used to maneuver the nationalist upheaval of the post-Soviet period. Though he was an ethnic Abkhaz, he married into a large Georgian family, and remained on good terms with his in-laws even as Abkhazia’s separatist war in the early 1990s tore the country apart.
The August 2008 war between Georgia and Russia was a victory for Mr. Bagapsh, who had long lobbied the Kremlin — or any other government, for that matter — to recognize Abkhazia as a sovereign nation. The slender wedge of beachfront land, once a cherished vacation spot for the Soviet nomenklatura, or ruling elite, was now under the protection of the Russian Army, and Mr. Bagapsh was received in Moscow as a bona fide head of state.
But he found himself in a far more difficult position than he had anticipated. Russians lined up immediately to grab prime real estate and privatize energy and transportation infrastructure, which could be crucial to preparations for the 2014 Winter Olympics in Sochi, Russia. Under extraordinary pressure from Russia to compromise, Mr. Bagapsh also had to answer domestic critics who accused him of selling off Abkhazia’s assets.
“After the August war, Abkhaz society — and this was also the tragedy of Bagapsh — is, if anything, more divided than it was before,” said Peter Semneby, the former European Union special representative to the South Caucasus, who met many times with Mr. Bagapsh.
“You have those who are very uncomfortable with the dominating role of Russia, and what they see as selling out, many of whom were behind the independence movement in the first place,” he said. “On the other hand, you have those who see a lot of economic opportunity. And these interests are very much being played out against each other.”
Both Russia’s president, Dmitri A. Medvedev, and its prime minister, Vladimir V. Putin, said on Sunday that they would view Mr. Bagapsh’s body to say farewell in person.
His death will very likely usher in a competition for power in Abkhazia, with Russia and Georgia jockeying for direct access to the next leader. Candidates for early presidential elections, scheduled for three months from now, will most likely include Prime Minister Sergei M. Shamba, who has advocated a “multivector” foreign policy that includes alliances with Turkey and the West; Vice President Aleksandr Ankvab, a close ally of Mr. Bagapsh; and Raul Khajimba, a former K.G.B. officer who left government to head an opposition party.
It has proved difficult to manipulate Abkhaz politics in the past. In 2004, Russia threw its weight behind Mr. Khajimba: pop stars were flown in to hold free concerts in his name; Mr. Putin, then the president, appeared with him on billboards; Russian lawmakers threatened to cut off the tangerine imports that were the territory’s economic lifeline. Mr. Bagapsh’s opponents, meanwhile, suggested he would cave to pressure from Tbilisi because his wife was Georgian.
Mr. Bagapsh won anyway. Russia imposed an import blockade, so that tons of tangerines rotted in trucks at the border. But Mr. Bagapsh moved into the presidential headquarters and set about negotiating with Mr. Khajimba, eventually forming a coalition government.
Recalling that brutal political war in an interview two years ago, Mr. Bagapsh was characteristically easygoing.
“I understood that it was politics, and it would pass, and I was right,” he said. “All the people who swore at me, said I was a mafioso and a bandit and so forth — today, they are my friends.”
Guram Odishariya, a writer, grew up not far from Mr. Bagapsh in the Abkhaz capital, known in Georgian as Sukhumi and in Abkhaz as Sukhum, a city where men gather on an embankment to play chess. Mr. Bagapsh showed an early aptitude for the long game, he said.
“He is the kind of person who plays 15 steps ahead,” he said. “There are leaders who play a child’s game, but Bagapsh is not one of them.”
Source: The New York Times
Related
Gönderen CW zaman: 23:50 No comments: 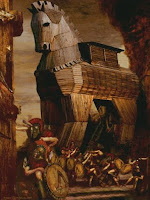 antigeopolitics, May 14 -- Ahead of the anniversary of the mass killings and forced exile of the Circassians from their ancestral lands in the Caucasus at the hands of the Russian Empire in the second half of the 19th century, which will be marked on the 21st of May, the parliament of Georgia has again mooted the possibility of recognising these events as genocide. The Circassian genocide has had a profound impact on Circassian history and national identity, and the process towards its recognition is given huge importance by many Circassians, especially among the diaspora in Turkey and the wider Middle East. However, until recently, no state has shown willingness to officially recognise the Circassians genocide as such. This changed in late 2010, when following a speech by president Mikhail Saakashvili, the process towards recognising the Circassian genocide was begun by the Georgian parliament. This process further sparked a conference on the Circassian genocide held in Tbilisi in March 2011, organised by the Jamestown Foundation and with the participation of the so-called American Committee for Peace in Chechnya, both known instruments of the US foreign policy establishment.
Since its failed bid to recapture the breakaway republics Abkhazia and South Ossetia in the 2008 August War, the Georgian overture towards the Circassians has formed part of a charm offensive to shore up support for Georgia among the peoples of the Russian North Caucasus, and drive a wedge between Russia and the peoples of the region. As seen from Tbilisi, the conflicts in the Georgian breakaway territories of Abkhazia and South Ossetia are merely the result of Russian efforts to destabilize an independent and sovereign Georgian state, and Georgia reckons that two can play this came. Ostensibly under the aegis of pan-Caucasian unity and solidarity, Georgian president Mikhal Saakashvili has ordered the abolition of visas to Georgia for citizens from North Caucasus republics, as well as the establishment of the Russian-language satellite TV channel “First Caucasian” or PIK in Russian. The idea was to give the inhabitants of the North Caucasus more possibilities for education and trade in Georgia, and also provide them with a source of “unbiased” information that is not controlled by the Russian government.
While Russian authorities have universally condemned Georgia’s moves, many in the North Caucasus republics themselves have been cautiously optimistic or supportive. However, there is considerable lingering distrust of the Georgian actions and their motives in the North Caucasus for historical and ideological reasons. The Circassians especially point to the role played by Georgia in the Russian conquest of the North Caucasus, where the Georgian nobility participated on Russia’s side against Circassians and other highlanders in the Great Caucasian War, which events eventually led to the Circassian genocide. Circassians also note what they see as double standards in Georgian dealings with them and what they see as their “brother nation”, the Abkhaz, especially in the light of Georgia’s attempts to suppress Abkhaz national aspirations during the 1992-1993 war in Abkhazia. In any case, it is widely believed that the Georgian conception of Caucasian unity is designed to further Georgia’s ambition to become a regional leader, a role which the other Caucasian peoples, fiercely independent and assured of their own position in the region, would naturally be wary to grant it.
There is also notable cause for concern when assessing the renewed Western interest in the Circassians and their predicament. Some Western opinion formers and policy makers acting through organisations such as the Jamestown Foundation have primarily the national interests of the West and the United States at heart, and seek to use the Circassians and other peoples of the North Caucasus as tools to further their own geopolitical agenda. This turn of events has historical precedents in British interest in the Circassian cause in the period running up to the Cirmean War, which even included pledges of military support to the Circassians in their fight against the Russian Empire. However, Circassian hopes in the British eventually turned out to be misplaced, as Britain abandoned all aid to the Circassians following the end of the war. Current Western support for the Circassians is not likely to be more reliable.
It is not at all clear either that recognition of the Circassian genocide by Georgia or other third parties would have the positive effect that Circassian nationalists, especially in the diaspora, are hoping for. Rather than force concessions from Moscow on cultural or political rights, or exact some form of apology and reparation for past wrongdoings, it is more likely that recognition will only harden the front between Russia and the Circassians and worsen the lot of Circassians currently living in Circassia. Examples here can be readily drawn from the efforts of many countries to recognise the Armenian genocide, which so far has failed to make Ankara relent on its position. In addition, the stubbornness by which recognition has been pursued, especially by the Armenian diaspora, have actually helped to further complicate the relationship between Armenia and Turkey, forestalling beneficial economic and diplomatic steps like the reopening of the Turko-Armenian border. Consequently, those among the Circassians who are prepared to accept outside support for their cause would do well to ponder who their allies are, and which possible consequences recognition could entail.
Source: antigeopolitics
Richard Berge holds a BA in Politics and Georgian language from the School of Oriental and African Studies at University of London, and a MA in Politics, Security and Integration from the School of Slavonic and East European Studies at UCL. He has worked for the Norwegian Embassy in Baku, Azerbaijan in 2009 and the European Centre for Minority Issues in Tbilisi, Georgia in 2010, focusing on human rights, freedom of information and minority rights in both countries. He is currently looking to publish his MA thesis on the political situation of the Armenian minority in Abkhazia.
Related Issues