RFE/RL, June 7 -- Meeting in Cherkessk on June 5, representatives of the Circassian minority demanded the division of the Karachayevo-Cherkessia Republic (KChR) to recreate the separate Cherkess Autonomous Oblast that existed from 1928-1957. They have addressed a request to that effect to Russian President Dmitry Medvedev, Prime Minister Vladimir Putin, and North Caucasus Federal District head Aleksandr Khloponin. It is the third such demand for Circassian autonomy in the past 17 years.
The so-called congress of the Cherkess people that formulated the demand for an autonomous oblast within the Russian Federation with the status of a separate republic was attended by the same 500-plus delegates who participated in a similar gathering in November 2008. On that occasion too, some delegates had advocated calling for a separate Cherkess republic comprising parts of the KChR, the neighboring Kabardino-Balkaria Republic, and the Republic of Adygeya. But delegates from Kabardino-Balkaria, where the Kabardians (ethnic cousins to the Cherkess) constitute a majority, declined to support that proposal. It was finally decided not to issue any such demand, but to give the Russian leadership time to address the KChR Circassians' grievances.
Foremost among the Circassian minority's complaints was the failure of KChR President Boris Ebzeyev to abide by a long-standing unwritten agreement on the division of leading posts among the republic's various ethnic groups. In line with that agreement, if the KChR president is a Karachai (as are Ebzeyev and his predecessor Mustafa Batdyev), the prime minister is a Circassian and the parliament speaker a Russian. According to the All-Russian census of 2002, 38.5 percent of the republic's population of 430,000 are Karachais, and 33.6 percent are Russians. The Circassians are the third largest ethnic group, accounting for 11.3 percent of the total.
Following his nomination as president in September 2008, Ebzeyev antagonized the Circassians by naming a Greek, Vladimir Kayshev, as prime minister and two Russians consecutively as parliament speaker. Tensions rose to the point that in March this year, the Russian, Cherkess, Abazin, and Nogai minorities addressed a collective appeal to the Russian leadership to replace Ebzeyev, whose leadership style has been described as "somnolent feudalism," as president with a Russian.
In an attempt to defuse those tensions, North Caucasus Federal District head Khloponin traveled to Cherkessk in late April and gave Ebzeyev until May 1 to name a Circassian as prime minister. But Ebzeyev failed to meet that deadline, and the man tentatively identified as his preferred choice for that position, his aide Fral Shbzukhov, was murdered in mid-May.
Ebzeyev then proposed as premier Circassian Muradin Kemov, who had served as acting prime minister since Kayshev's dismissal, rather than either of two alternative candidates whom the Circassian community preferred. Kemov attended the June 5 gathering "not in his capacity as prime minister but as a Circassian," according to Mukhammed Cherkesov, who heads the KChR-based Circassian public organization Adyghe Khase.
A second collective Cherkess grievance, according to Cherkesov, is perceived economic and cultural discrimination of the Cherkess by the Karachai majority.
The June 5 congress was also attended by representatives of the KChR's other ethnic minorities, including Nikolay Khokhlachev, a Russian who heads the Coordinating Council of National Public Organizations.
Mussa Takushinov, representing the KChR's Abazin minority, told Caucasian Knot that until now he has always opposed the idea of splitting the KChR, but now he sees it as the only solution to the mutual lack of respect between the various ethnic groups.
The delegates stressed that during the process of recreating the Cherkess Autonomous Oblast -- a process that they acknowledge will take years -- and selecting its leaders, the rights of all the ethnic groups that will live there must be respected. They further acknowledged that creating a new oblast will require changes to the constitution of the existing KChR. But Cherkasov said he does not believe that a referendum on the issue is necessary. "No one asked our opinion when they lumped us together with the Karachais," he said.
There has been no official reaction yet to the Circassians' bombshell from Ebzeyev's administration. But Karachai parliament deputy Akhmad Ebzeyev (not known to be a close relative to his namesake Boris) downplayed it as motivated primarily by unnamed Circassian interest groups out to embarrass the president.
Gönderen CW zaman: 18:42 No comments: 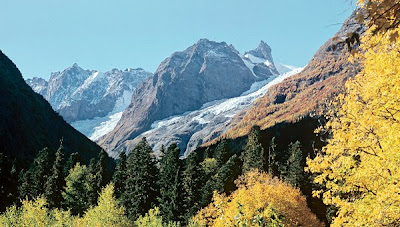 Karachayevo-Cherkessia, Teberda state nature reserve
MOSCOW, June 6 (RIA Novosti) -- A public organization of Circassians, a North Caucasus ethnic group, gathered for an emergency congress on Saturday to ask the Russian authorities to create a Circassian autonomous area, Russian media reported.
The Circassian autonomous area existed within the Soviet Union in 1928-1957. The majority of Russian Circassians currently live in the Russian North Caucasus Republic of Karachai-Circassia, where they make the third largest ethnic group (11.3%), after Karachais and Russians, according to the 2002 census.
"Under the current state of affairs in the Republic of Karachai-Circassia, the Circassian people have no legal perspective for their revival and development," Nezavisimaya Gazeta quoted a statement by the congress' organization committee.
A similar request filed in 2008 was "ignored" by the Russian authorities, the congress said.
The public organization of Circassians has been seeking autonomy for Circassians since 1994, citing "mono-national ethnocracy" and "a violation of constitutional rights of Circassians and other peoples to hold the leading posts in the republic."
Political controversies in republic came into focus in March after a leader of the organization's youth movement was killed. Members of the movement claimed that this was an assassination. The tensions further escalated last month after an aide to the republic's president, an ethnic Circassian, was killed on May 12.
Gönderen CW zaman: 12:04 No comments:

Human rights in the North Caucasus: the most serious situation in the geographical area of the Council of Europe

Strasbourg, 31.05.2010 – The situation in the North Caucasus region, particularly the Chechen Republic, Ingushetia and Dagestan, is currently “the most serious and delicate situation” from the angle of protecting human rights and affirming the rule of law in the whole geographic area covered by the Council of Europe, as stressed by the text adopted this morning by the Committee on Legal Affairs and Human Rights of the Parliamentary Assembly of the Council of Europe (PACE), on the basis of the report drawn up by Dick Marty (Switzerland, ALDE).
The unanimously adopted draft resolution paints a dark picture, particularly in the Chechen Republic, where the current authorities continue to nurture “a climate of pervading fear”, recurrent disappearances of opponents of the Government and champions of human rights “remain widely unpunished” and the judicial organs “plainly do nothing about the misdeeds of the security forces”. All of this is happening in an atmosphere of personalisation of power which is “disgraceful in a democracy”.
In Ingushetia, the parliamentarians noted “an alarming upsurge of violence since 2009”, while in Dagestan, the outbreak of terrorist acts has prompted “prompted responses of the security forces which are not always lawful and productive".
The text adopted reaffirmed the Assembly’s aversion to any act of terrorism, a phenomenon which can only be fought effectively “while respecting fundamental rights”. It also pays tribute to human rights advocates, lawyers and journalists working in difficult circumstances, and often in peril of their lives, to help victims obtain justice and denounce abuses.
The draft resolution calls on the Russian central and regional executive and judicial authorities to combat terrorism “by availing themselves of the instruments provided by the law-based state”, and to look for the causes of the radicalisation in progress and the growing hold of religious extremism; to prosecute and try “in accordance with the law all culprits of human rights violations”, including members of the security forces, and to co-operate more closely with the human rights defence organisations, while “protecting their staff members effectively against possible reprisals”.
In connection with enforcing the judgments of the European Court of Human Rights finding serious and repeated violations of fundamental rights, the text welcomes the “specific efforts made by the Russian authorities”, while observing that “appreciable results in the matter are still awaited”. The climate of overall impunity illustrated by the Court’s judgments “seriously undermine(s) the population’s trust in the security forces and the state institutions generally, and thus feed(s) the nefarious spiral of violence”.
In the parliamentarians’ view, the other Council of Europe member countries should co-operate with the Russian authorities in combating terrorism, “guarantee adequate protection to the Chechen exiles” whom they have received in their territory and “consider with the greatest care and caution extradition requests in respect of exiles
from the North Caucasian republics who would risk being killed, subjected to torture or an unfair trial”.
The Assembly will be debating the draft resolution in Strasbourg during its forthcoming summer plenary session (21-25 June 2010).
Gönderen CW zaman: 18:08 No comments: