Hitler calls on Georgians to win back Abkhazia‏ 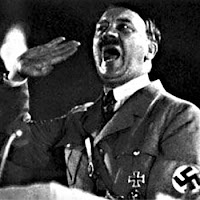 December 25, 2009 - by Kirill Kolodin (Tbilisi) - Izvestiya
The television channel “Sakartvelo” aired a remarkably creative video that, in theory at least, should entice young people to join the army. The video does not particularly have any distinguishing special effects; in it, some cheerful young men are heading from a recruiting station to the army headquarters. As they enter through the welcoming, swung-open doors, it seems to be the perfect place for a slogan such as: “Welcome to the army, son!” But instead, a quote by Adolf Hitler appears on television screens.

“We once and for all must understand that we will never be able to regain the lost territory with prayers, which have become a formality, nor with hopes in the League of Nations, but with the strength of our weapons. Adolf Hitler. 1932.” These subtitles are accompanied by a well-performed voiceover – perhaps to make it more convincing.
Perhaps only the creators of the video know why the Fuhrer needed to be included in the propaganda campaign – especially since there is already an abundance of similar banal expressions that could be found in the repertoires of many politicians and military commanders. Thus, there was absolutely no need to include Hitler as the main “revenge expert.”

The misstep of the political strategists is clear. A television campaign was being created based on the approval of an official representative of Georgia’s Ministry of Defense and according to the example of the NATO countries. But it is hard to imagine that “in order to promote the military,” Americans, the English, the French and especially the Germans would use “Mein Kapf” or other classical writings of the Fuhrer.

It is not clear as to how long the scandalous clip has been on the air. The television company does not have a wide audience, despite the fact that it is broadcast over the entire country. In April 2007, Sakartvelo began cooperating with the military based on the “Law on State Procurement,” and began operating in September of the same year.

Prior to that, Channel 33, which broadcasts Sakartvelo, belonged to the opposition television company of Eduard Shevardnadze and Mikhail Saakashvili, 202. According to the latest available information, currently Sakartvelo is owned by Denal Union. In November 2009, the non-governmental organization Transparency International called the company “mysterious” in one of its reports.

While it is just a coincidence, Georgian activists of the Center for Human Rights posted the clip on their website – http://www.hridc.tv/ and http://humanrights.ge/ – almost immediately after the clip on the destruction of the Memorial of Glory in Kutaisi. The clip was posted on the eve of the Georgian government’s presentation of the “State Strategy in Relation to the Occupied Territories,” according to which Georgia’s leadership plans to resolve the Abkhazia and South Ossetia conflicts only thought peaceful means.

Dec. 9 - Hurriyet Daily News - The Circassians, a small section of Turkish citizens, have granted support to the government’s recent democratic initiative, saying that rights should be granted to all communities in Tu

rkey without having to resort to violence or racism. They say the Constitution should be amended to better ensure individual rights and to remove any mention of ethnicity
Although the recent Kurdish initiative in Turkey is focused on Kurds’ rights, there are others who say they are in the game, too. Approximately 1,600 Circassians launched the “Circassian Initiative for Democracy” to voice the demands of Circassians living in Turkey.

“We came together to voice democratic rights for everyone in Turkey. These rights should not be dependant on any kind of ethnicity but on the grounds of citizenship,” said Yalçın Karadaş, spokesperson of the initiative, at a press conference in Istanbul on Wednesday.

Üstün said the group’s second request was to have a center established to collect and research the Circassians’ cultural and historical assets that have been dispersed to different geographies.

He said the group’s official history had to be “repaired” and all the discourses that falsely accuse communities including Circassians should be removed from history textbooks and official history.

Members of the Circassian initiative complained that Circassians have been depicted in textbooks as a rebellious community, which has undermined their contribution to history and culture. “Circassians published the first magazine with the Latin alphabet and launched the first sports club in Turkey, but these are unknown truths,” said Karadaş, who is also an architect.

Another request was for the Constitution to be amended with civil society and individual rights in mind and it should not have any mention of ethnic identities, said Karadaş. “Any emphasis on ethnicity in the Constitution as well as in the democratic initiativewill harm the country and the communities living in it,” said Karadaş.

Refraining from being associated with separatist groups or ideologies, the Circassian initiative members underlined the importance of calling for democracy through peaceful measures. “Among the Circassian community in Turkey, some might accuse us of being separatist. To the contrary, if this democratic initiative is stopped, then Turkey will deteriorate,” said Karadaş.

The Circassian Initiative for Democracy was launched to voice all the people’s rights, not only Circassians, in a peaceful way by using dialog, said Karadaş, adding that the initiative is focused on voicing demands through peaceful channels. “No one deserves to die for the right to education in their mother tongue,” said Karadaş, recalling Serap Eser, 17, who recently killed in a bus by a Molotov cocktail thrown by alleged members of the outlawed Kurdistan Workers’ Party, or PKK. “We are not planning to go to the streets to voice our demands because the streets are open to provocation,” he said.
Gönderen CW zaman: 13:10 No comments:

Support for Circassian Nationalism Grows in the North Caucasus, by Fatima Tlisova

Rising tensions in Kabardino-Balkaria (KBR) involving two neighbouring republics Karachaevo-Cherkessia (KChR) and Adygeya (EDM, November 25) have led to violence. On December 1, the headquarters of the “Khasa” Circassian in Nalchik was attacked by a group of 50 people described as well-built sportsmen. The attack happened the day after the “Khasa” released a declaration of its goal to unite the Circassian republics and create an independent state (http://www.lenta.ru/, December 1).

The young leader of the Circassian Congress of the KBR, the scholar and political activist Ruslan Keshev, who is known for his public resistance against the Sochi Olympics and his aspiration for recognition of the Circassian genocide, was hospitalized with multiple injuries after being brutally beaten. In the statement released immediately after the December 1 attack, “Khasa” gave details of the incident. According to the statement, the attackers’ goal was to neutralize physically the Circassian leaders in order to prevent them from holding a national meeting set to take place in Nalchik on December 5 (http://www.elot.ru/, December 1).

On November 26, four days prior to the attack on the Circassian leader in Nalchik, a national protest demonstration took place in the neighbouring republic of Karachaevo-Cherkessia. More than 3,000 young Circassian and Abaza people (ethnic cousins of the Abkhaz) attended the demonstration, which took place in Cherkessk, the KChR capital. Approximately 200 Circassians from Kabardino-Balkaria, led by Ibragim Yaganov and Ruslan Keshev, drove from Nalchik to participate in the protest. The group was blocked at a checkpoint by the Stavropol Krai police. The Circassian delegates were told to leave their vehicles and walk to Cherkessk if they really intended to join the demonstration. Given that the distance from the checkpoint to Cherkessk is more than 35 miles, the suggestion to walk made by the police was not a serious one. However, the Circassians left their cars at the checkpoint and marched four miles on the highway holding Circassian flags until forty vehicles sent from Cherkessk arrived to pick them up (http://www.youtube.com/watch?v=WlIN83Vn1EA).

The demonstration in Cherkessk declared a need for an emergency national meeting to discuss and decide on immediate steps the Circassians need to take in order to survive in the Motherland. On November 28, two days prior to the attack on the Circassian leaders, a public meeting took place in the KBR capital, Nalchik, in which a group of the people known to be part of the team of the president of the republic, Arsen Kanokov, made a public statement about the political activities of the “Khasa” and the Circassian congress. The leaders of both organizations were described as public enemies, agents of the ChRI (the separatist Chechen Republic of Ichkeria) and provocateurs trying to destabilize the situation in Kabardino-Balkaria (http://www.elot.ru/ , November 28).

On November 1, the parliament of the Republic of Karachaevo-Cherkessia lodged a complaint with the Russian prosecutor-general against the Circassian movement in the KChR, accusing its leaders of crimes under articles 280 and 282 of the Russian criminal code (http://www.skynews.ru/, November 26).

Article 280 defines crimes falling under the category “public calls to overthrow the constitutional regime of the Russian Federation.” Article 282 defines crimes “inciting ethnical, racial and religious hatred” (http://ukrf.narod.ru/glavy/g29.htm). It is quite likely that the meeting in Nalchik to accuse the Circassian leaders of having relationships with Western intelligence agencies and acting against the interests of the state, and the appeal to the prosecutor-general issued by the parliament in Cherkessk, are inter-connected and were even initiated by the same behind-the-scenes power. This is the technique used by Moscow to humiliate the opposition: first, marginalize the leaders in the eyes of public opinion; second, accuse them of the most serious crimes.

This policy, combined with physical elimination when necessary, proved to be effective when used against all types of opposition in the USSR, as well as during last 10 years of Russia’s “special type” of democracy. Studying the history of both the Circassian resistance against Russian power since the period of colonization and the Kremlin’s typical responses to resistance helps to reach a better understanding of the current situation. According to the chronology listed in the Circassian Encyclopaedia, 17 officially recorded mass insurrections took place on the territory of historical Circassia. The invariable response from the Russian state, no matter what regime was in power, was to send it troops to carry out merciless repression (The Circassian Encyclopaedia, Moscow 2006, pp. 1130-1138).

The most recent example was the insurrection in Nalchik in October 2005. It might be one of the very rare battles in which no rebel was left injured, and assassinations of the helpless wounded continued after the battle was over (Novaya Gazeta, December 22, 2005). It is possible that Moscow may once again consider using military force to solve the problem if the protests in Circassia turn into mass protests.

An escalation of the situation in the Caucasus, however, strengthens the ties between the Circassian Diaspora and their homeland in the Northwest Caucasus. Diaspora Circassians are expressing their deep concern about the events in the Caucasus. At the end of November, the leaders of Circassian organisations in Israel, Jordan and Turkey made public statements in support of the Motherland. Two meetings of Circassian organizations are set to take place on December 4 and 6 in Turkey and Jordan. Recent developments in the Northwest Caucasus will be a major subject of focus during these discussions
(http://www.natpress.net/stat.php?id=4550).