Skinhead Violence Leading Non-Russians to Arm Themselves in Self-Defense 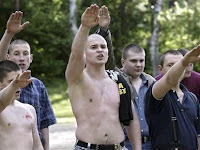 by Paul Goble - Window on Eurasia
Vienna, October 6 – Potential victims of skinhead violence – many of whom are non-Russians –increasingly are arming themselves for self-defense, a pattern that helps to explain a rise in the number of ethnic Russian deaths in the course of such violence this year and one that likely presages more serious problems ahead, according to the Moscow Human Rights Bureau.

A new report by that organization about xenophobic crimes during the first nine months of this year found that “the number of murders committed on the basis of racial hatred [in fact] had declined overall in comparison with an analogous period of the year before” and that “neo-Nazis” guilty of them are now more likely than before to be sentenced to long prison terms.

But those positive trends, the Bureau’s director Aleksandr Brod suggested to “Novyye izvestiya,” were balanced by two negative ones: “the racists have begun to commit terrorist acts and vandalism more often” than before, and the increasing number of people with weapons suggests future violence will be more deadly (www.newizv.ru/news/2009-10-06/115400).

The Bureau report said that for the first nine months of 2009, the statistics it had assembled show that “the nationalists committed 181 attacks,” which left 59 people dead and 235 wounded, a somewhat less awful situation than for the same period in 2008 when 100 people were killed and 308 were wounded.

As in the past, Moscow and St. Petersburg led the list with a total of 33 killed and 134 wound, but among them, the number of ethnic Russians increased to second place. The paper said that “experts explain this by the fact that the constant attacks on representatives of minorities have generated manifestations of nationalism by the latter in response.”

Moreover, Brod pointed out, “people are beginning to arm themselves [because] they are not prepared to put up with acts of violence by the skinheads anymore.” That pattern could easily trigger an arms race with skinheads acquiring and using weapons in the expectation that those they attack with be armed as well.

Moreover, “Novyye izvestiya” said on the basis of the Bureau report, “52 nationalists were sent behind bars for periods of from five to 25 years, and 50 more received sentences of from one to five years.” At the same time, 61 were given suspended sentences, and a few were fined or confined in psychiatric facilities.

While it can be expected that Russian officials will argue that their tougher stand against hate crimes is responsible for the decline in their number, Brod for his part is “not inclined” to make that linkage. He told “Novyye izvestiya” that the economic crisis is creating fertile ground for the extremists, with “young people showing greater interest in [skinhead] ideas.”

And the human rights researcher said as a result, “even with active law enforcement, we will not be fated to succeed until corresponding migration problems,” including the integration and acceptance of non-Russians in formerly ethnic Russian areas, are addressed more successfully than they have been up to now.

In a final comment, Brod noted that the skinheads and other extremist nationalists appear to have changed their tactics, shifting from murders, which his organization has tracked for some time, to terrorist actions, including against the militia, and vandalism, a crime that perpetrators can often commit with little chance they will be caught.

Today’s Moscow media featured two reports that highlight just how explosive the inter-ethnic scene now is in parts of the Russian Federation that until recently were overwhelming ethnically Russian but now have large immigrant populations, many of whose members have not adapted to Russian realities or been accepted by the ethnic Russians around them.

In the first of these stories, Georgy Nagayev of Perm describes the influx of Chechens and other groups from the Caucasus and Central Asia and their ability to dominate local militia commander and thus escape punishment, a pattern that could point to a new Kondopoga-like clash in the region (www.apn.ru/publications/article22018.htm).

And in the second, “Novyye izvestiya” reports that the situation in Moscow as a result of the influx of migrant workers and their decision to live apart in ethnic neighborhoods reflects the difficulties they have adapting to the Russian environment of the capital and that Russians have in adapting to them (www.newizv.ru/news/2009-10-06/115399/).

As the paper points out, the situation has become so dangerous that the city government now maintains a map of districts which have a high potential for conflict because members of one or more of the more than 100 national diasporas in the city have clustered to provide mutual support even as these neighborhoods themselves become targets of xenophobic attacks.

Given that people on both sides of these divides are now likely to be armed, the fall in the number of deaths as a result of xenophobic crimes is unlikely to continue, especially if, as seems likely, ever more of those killed turn out to be ethnic Russians, something groups like the Movement Against Illegal Immigration (DPNI) are already playing up.
Gönderen CW zaman: 10:37