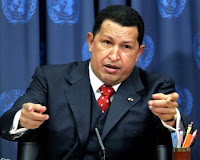 “Venezuela joins the recognition of independence of the republics of Abkhazia and South Ossetia,” the South American leader said during his visit to Russia.

He added that Caracas will soon take action to establish official diplomatic links with both countries.

Commenting on the news, Russian President Dmitry Medvedev said: “We always said it was the sovereign right of every nation to either recognize them or not to, so this is a big commitment.”

He thanked Chavez for supporting Russia in taking heart in the fate of South Ossetia and Abkhazia.

Venezuela became the third member of the United Nations after Russia and Nicaragua to support the independence of the former Georgian republics.

Russia recognized them shortly after defending South Ossetia from at attack by Georgian forces in 2008.

The majority of other nations, including four other members of the UN Security Council opposed the move, saying that the principle of territorial integrity was more important in this case than the right of nations to self-determination.