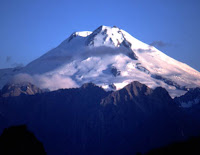 NatPress - September 11 - In honour of the World Circassian games of 2012 on September, 8th an expedition from seven persons climbed onto Elbrus. One of the authors of the project Sufian Zhemuhov observed the climbing. The other author of the project Alexey Bekshokov, chairman of the Union of the Abkhazian volunteers, handled the climbers for fixing on Elbrus the Circassian flag which on September, 27th, 1993 was fixed above the building of the Government of Abkhazia at its clearing by the Kabardian reconnoiter-assault group.

“Our climbing, - Sufian Zhemuhov said, - had two purposes: on the one hand, the climbing to Elbrus will focus attention to our project which overall objective is let the world know Circassians better. On the other hand, we anticipate the opening the World Circassian games when in 2012 as the symbolical opening of Circassiad would be ignition at top of Elbrus of the Olympic fire which will be carried through the subjects of Russian Federation where Circassians live, as well as across the countries with Circassian Diaspora”.

Handing over to the participants of the climbing certificates of honour on behalf of the Union of Abkhazian volunteers, Alexey Bekshokov told: “This climbing is a historical moment. For the first time for the sixteen years after fixing of the Circassian flag on the building of the Government of Abkhazia now it is fixed on the highest top of Europe. I think the World Circassian games are the project, worthy such honour”.

Ahmed Psheunov, Abkhazian volunteer who had sponsored the climbing, accepting on behalf of the Union of Abkhazian volunteers the Diploma “Ambassador of Circssiad-2012”, assured that the organization would try to justify the mission it was entrusted and would devote to that its separate direction in the activities. His son Ali, a member of the expedition, expressed his pride to that he had taken part in the climbing.

Kazbek Shibzuhov, guide of the expedition, noted that for his memories it was the first Circassian ethnic project in honour of which climbing on top of Elbrus was organized. The other participant of the expedition a television cameraman Alim Eleev who was shooting the climbing, offered to include in the program of Circassiad- 2012 a high-speed climbing as a show kind of sports.

At the top of Elbrus the members of the expedition met two foreign groups of the climbers and together with them loudly proclaimed for several times in English: “Kindness begets kindness”, - the Circassian saying which became the slogan of Circassiad.

The head of the Belgian group of climbers led by the well-known climber Rudi Van Snaik, who had subdued the highest tops of all the continents, including three times climbing to Everest, expressed his interest in the project of Circassian Olympiad and supported the participants of the organized climbing.

One of the members of the other international group of the European climbers Rudolf Fekhbauer, an engineer from Germany, was interviewed by the Russian TV-channel "World" in which he expressed a pleasant surprise that Russia organizes Circassian Olympiad before the Sochi Olympiad. “By means of this Russia shows the world that it respects the peoples living in its territory as recently China during the Peking Olympiad had shown tolerance and humanity concerning to the problem questions of the internal policy”, - the German climber declared.

After returning of the expedition to Nalchik on Abkhazia square the ceremony of awarding of the diploma “Ambassador of Circassiad-2012” to the Union of Abkhazian volunteers took place. The text of the diploma says:

“The union of Abkhazian volunteers is the Ambassador of Circassiad-2012 - the World Circassian games. In honour of it on September, 8th, 2009 on the top of Elbrus the Circassian flag which for the first time had been fixed by volunteers Azamat Khagazheev and Aslan Abaev above the government building after the storm by the division of the armed forces of Abkhazia - Kabardian reconnoiter-assault group Muaed Shorov on September, 27th, 1993 during clearing of Abkhazian capital Sukhum by the Abkhazian army, is set up”.
Gönderen CW zaman: 16:17