Who is the agressor? Quotes from Saakashvili 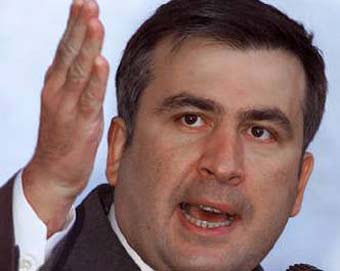 On the anniversary of the Georgian assault on the South Ossetian capital, Tskhinval, and its environs, and in view of Georgian President Mikhail Saakashvili's article yesterday in The Washington Post, it might be useful to remind ourselves of some earlier words that rolled off Saakashvili's lips.

Below is what Saakashvili said in his article in Washington Post ''Georgia, On the Rebound'', by Mikheil Saakashvili, 7 August 2009

''On the night of Aug. 7, 2008, Russia's 58th Army crossed over Georgia's internationally recognized borders. Thus began what the evidence shows was a long-planned invasion aimed at toppling my government and increasing Moscow's control over our region.''
********
Below is what Civil Georgia reported in 8 August 2008 in its entirety.

“President Saakashvili said he had announced a general mobilization of reserve troops amid “large-scale military aggression” by Russia.
In a live televised address on August 8, Saakashvili said Georgian government troops had gone “on the offensive” after South Ossetian militias responded to his peace initiative on August 7 by shelling Georgian villages.

As a result, he said, Georgian forces now controlled “most of South Ossetia.”

He said the breakaway region’s districts of Znauri, Tsinagari, as well as the villages of Dmenisi, Gromi, and Khetagurovo, were “already liberated” by Georgian forces.

He also said that Georgia had come under aerial attack from Russian warplanes on August 8, which was an obvious sign of “large-scale military aggression” against Georgia.

The Georgian Ministry of Internal Affairs said that three SU-24 Fencer attack aircraft had breeched Georgian airspace on August 8, and one of them had dropped two bombs close to a police station in Kareli, slightly injuring several people.

“Immediately stop the bombing of Georgian towns,” Saakashvili told Russia. “Georgia did not start this confrontation and Georgia will not give up its territories; Georgia will not say no to its freedom… We have already mobilized tens of thousands of reserve troops. Mobilization is ongoing.”

“Hundreds of thousands of Georgians should stand together and save Georgia,” he added.

Note there is no mention of Russian forces in the Roki Tunnel: He gives quite different reasons.

Saakashvili’s story has changed: see Patrick Armstrong's piece (with Georgian sources) on JRL/2009/ (http://www.cdi.org/russia/johnson/2008-170-21.cfm) documenting these changes. The “Russians are already in the Roki Tunnel” excuse – of which Saakashvili put forth two variations) only appeared after the operation went so badly wrong.

And BTW – here’s the Civil Georgia report of the Kurashvili statement from 8 August (http://www.civil.ge/eng/article.php?id=18941&search=). So, if it's a "fabrication", it's not a recent one.

A senior official from the Georgian Ministry of Defense said Georgia had “decided to restore constitutional order in the entire region” of South Ossetia. Mamuka Kurashvili, an MoD official in charge of overseeing peacekeeping operations, told journalists late on August 7 that the South Ossetian side had rejected Tbilisi’s earlier decision to unilaterally cease fire and had resumed shelling of Georgian villages in the conflict zone.

*********
The War He Actually Got
by Patrick Armstrong
President Saakashvili of Georgia is now (since 25 August) claiming that the Georgian invasion of South Ossetia on 7 August was a response to the movement of Russian forces through the Roki Tunnel into South Ossetia. (http://www.civil.ge/eng/article.php?id=19282).

First, we know this claim to be false because, in his “victory speech” on 8 August (http://www.civil.ge/eng/article.php?id=18955&search=control ossetia ), he did not say so. His excuse then was that the Ossetians had not responded to his ceasefire proposal made a few hours earlier and he also claimed a rather ineffective air attack by Russian forces. Second, deputy defence minister Batu Kutelia was quoted on 21 August saying Tbilisi did not expect a Russian response (http://www.ft.com/cms/s/0/0d8beefe-6fad-11dd-986f-0000779fd18c.html?nclick_check=1). Third, Georgia’s former defence minister, Irakly Okruashvili, (now, like many of Saakashvili’s former colleagues, in opposition) has admitted that Tbilisi always had plans to conquer South Ossetia and Abkhazia (http://www.reuters.com/article/newsOne/idUSLD12378020080914?sp=true).

But, let us assume ­ pretend ­ that on 7 August, the Russian 58th Army had started through Roki and ignore the fact that, had it done so, the Georgian forces would have met Russian soldiers in the early hours of the next day in Tskhinvali ­ the road distance from Roki to Tskhinvali is only about 55 kilometres. But there are no reports that they did.

But nevertheless, even if we assume this to be true, two serious questions remain. First, Tbilisi still has to explain the indiscriminate bombardment of a town that Saakashvili considers to be full of Georgian citizens: “liberated” being the word he used on the 8th. (A list of 312 Ossetians, by name, so far identified as killed is here http://www.osetinfo.ru/victims). (Although Saakashvili has the brass to blame Russia for that: “They leveled city of Tskhinvali with carpet bombardments and came around and blamed Georgians for that.” (or so he told Ms Rice on 15 August http://www.state.gov/secretary/rm/2008/08/108289.htm). Second, we have to explain what the Georgian army thought it was doing in attempting a race up the single road hoping to beat the Russians, with their supposed head start, to Didi-Gupta or Roki. The “Russians moved first” accusation is a red herring.

Surely there is a much simpler explanation: Saakashvili always intended to re-gain South Ossetia, by war if necessary (we have Okruashvili’s testimony). The whole thing was supposed to have been more-or-less complete by Friday night; indeed, Saakashvili thought it was nearly over then and on the 8th he claimed that Georgian forces already controlled “most of South Ossetia”. Georgia's friends in the West would be then be calling for a ceasefire in place. (Okruashvili’s assessment: “Saakashvili's offensive only aimed at taking Tskhinvali, because he thought the U.S. would block a Russian reaction through diplomatic channels.”) Therefore, by Friday or Saturday, it would have been a done deal. A large percentage of Ossetians would have fled to the north away from the bombardment (a third to a half already had), more would be leaving, the Russians would be blocked and everyone would be looking at a fait accompli.

In short, the war that Tbilisi thought it was starting was a one- or two-day war which would have left South Ossetia empty of Ossetians and the Russians unable to do anything about it. And, as Okruashvili made clear, it would then be the turn of Abkhazia (“Abkhazia was our strategic priority, but we drew up military plans in 2005 for taking both Abkhazia and South Ossetia as well”). In short a coup de main producing a quick fait accompli. Had the Georgian forces got through Tskhinvali and blocked the bridge at Didi-Gupta by Friday night, we’d be looking at a very different situation today.

A weakness of much analysis about wars is that analysts often try to explain why the war that actually happened began: how could Tbilisi have expected “little Georgia” to prevail against “mighty Russia”? But the real effort is to explain the war that the attacker thought he was starting. On the night of 7 August, Tbilisi, as many others in history have done (vide NATO’s 78-day, 20,000 sortie campaign in Kosovo and Serbia), began an operation that was expected to be short and victorious. But, as Field Marshal von Moltke observed: “No battle plan survives contact with the enemy”. Tbilisi’s hopes were stopped, first by the resolute action of Ossetian defenders (some Tskhinvali combat footage in http://www.youtube.com/watch?v=tgSvYtjzZt8 ; go to 7:50) and the arrival of Russian ground forces on Friday.

Saakashvili today has a different war to explain than he did on 8 August. Then it was the successful “liberation” of Georgia territory. Today he’s trying to justify something rather more apocalyptic: “Russia intends to destroy not just a country, but an idea…. This war threatens not only Georgia but security and liberty around the world.” http://www.guardian.co.uk/commentisfree/2008/aug/15/georgia.russia, 15 August). He needs a new, bigger, explanation in which Georgia is the defender of “security and liberty around the world” against a Russia that wants to “demolish the post-cold war system of international relations in Europe”.