Production of feature film Cherkess starts in October 2009 in Jordan 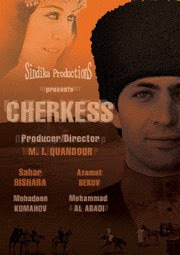 Production of a feature film Cherkess (Al Sharakissa) starts in October 2009 in Jordan. The film story covers the arrival of immigrant Circassians to Ottoman Transjordan in the year 1900.
Dostoyevsky once said 'Beauty will save the world'... and this film is based on such a perception.

The film shows the different aspects of two cultures, the Bedouin and the Circassian, who were unwillingly thrown together by historical providence, creating a perfect recipe for controversy and violence but saved by the miraculous powers of innocent, unexpected love. This is a story of two young souls who fall passionately in love and by so doing bring about the reason for conflict and bloodshed... as well as for potential harmony and peaceful coexistence; the quintessence of drama, when the pendulum could swing in either direction.