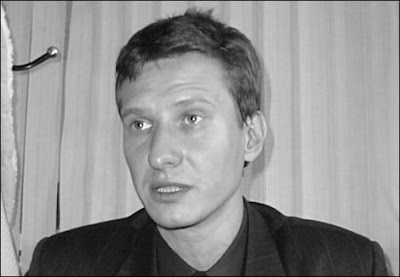 Yet another human rights advocate killed in the capital of Russia. Lawyer Stanislav Markelov was shot on Prechistenka street in the center of Moscow. Stanislav was only 34 years old, but he was well known not only in the milieu of human rights advocates, but in wider circles as well. First and foremost, he was known as the Moscow lawyer who was not afraid to conduct cases in Chechnya, defending Chechen citizens. In recent days, his name was never off the pages of the mass information media, because he was striving to get the conditional early release of Yuri Budanov, a former colonel who killed the young Chechen woman Elza Kungayeva, declared unlawful.

And it was right after a press conference dedicated to this unlawful release that Stanislav was killed.

The head of the investigative administration for Moscow, Anatoly Bagmet, has already declared that the murder of the lawyer may be "associated with his professional activity."

This phrase in Russia has already become so typical that personally, it irritates me with its stupidness and routineness. If they kill a journalist or a lawyer, then what other reason can there possibly be in Putin's Russia besides the profession of these people!

It was not by chance that I have recalled the profession of journalist: many consider that the murders of Anna Politkovskaya and Stanislav Markelov are very similar. First of all, because they were killed for the honest fulfillment of their professional duty and because the state organs did nothing for the protection of such professionals.

Furthermore, the state had knowledge of facts of threats both to the address of Politkovskaya, and to the address of Markelov. Why did the law-enforcement organs not do a single damn thing to protect the journalist and the lawyer? Could it be because the state organs themselves weren't very interested in preserving the lives of these people?

Markelov is also known for the fact that he worked on cases against Russian Nazis. With Markelov was «Novaya gazeta» journalist Anastasia Baburova, who happened to be writing specifically about cases connected with the activity of Russian nazis. The killers gravely wounded her in the head.

Stanislav Markelov likewise represented the interests of the journalist Mikhail Beketov, savagely beaten in November of the year 2008. Beketov is known as the opposition journalist who had published unmasking articles about the officials of the administration of [Moscow suburb] Khimki in the newspaper "Khimkinskaya pravda" and was actively fighting to save the Khimki forest, which until recent times had been threatened with clearance in connection with the construction of the Moscow-Petersburg expressway.

Here is the opinion of human rights leader Lev Ponomarev, whom I telephoned immediately after the murder of Stanislav Markelov:

"This was a person close to me. What is especially tragic is that this was a young person. Tomorrow we in conjunction with «Memorial» are conducting an action of memory for the slain lawyer. Stanislav literally dodged bullets in our country: he led cases in Chechnya, cases against nazis, was the lawyer for the family of the young Chechen woman killed by Budanov... The nazis threatened him openly, on their websites were hanging threats to his address. I reminded him about precautionary measures, but what could he do?.. They killed the person, as is said, at the battle station."

And here is the opinion of Stanislav's colleague, the lawyer Mikhail Trepashkin:

"This murder proves yet again that in our country it is dangerous to be a defender of the rights of people, if the opposite side is - the state or people near to it. The state clearly sympathized with both the Nazis and Budanov. And against lawyers who defend the rights of people, especially if these rights are violated by state organs or law-enforcement organs, at times are applied even such measures as arrest, the initiation of fabricated cases. For a long time already, there is talk about the creation in Russia of a special structure for the protection of lawyers. We see that certain lawyers are already afraid to take part in the defense of politically motivated criminal cases."

To this I add that Trepashkin himself conducts such cases as the persecution of the organization «Portos»; defends the rights of the journalist Boris Stomakhin who is sitting in a colony.

And so, yet another high-profile and audacious murder has been committed in the Russia of the times of Putin. I doubt that it will ever be fully solved. At best, as with the case of Anna Politkovskaya, they'll take the triggerman into custody.
Gönderen CW zaman: 00:43