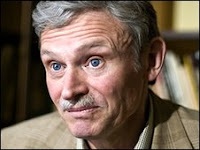 A senior scientist has told the BBC he has fled Russia to avoid arrest after warning of a possible disaster in the run-up to - or even during - the next Winter Olympics.
Sergei Volkov
The games are due to be held in the southern Russian city of Sochi in 2014.
Dr Sergei Volkov, a former consultant to the Sochi Winter Olympics, is in hiding in southern Ukraine because he fears being detained by Russian authorities on trumped-up criminal charges.

He says he refused to keep quiet after discovering that the massive construction programme was forging ahead without essential research into the region's complex geology and ecology.

"It's a potentially dangerous area," said Dr Volkov, a geologist by profession.

He gave the interview in a small room where he now lives with just a laptop, an internet connection and a few books and files.

"There have been big landslides in the past and there are large deposits of mercury, uranium and other potentially dangerous minerals. But all scientific advice is being ignored," he said.

He believes the government took the political decision to hold the games before they had thought through how much preliminary work was needed in the area.

Shortly after arriving in Ukraine, Dr Volkov wrote an open letter to Russian President Dmitry Medvedev warning him of the dangers.

He sent his letter after a storm destroyed a new cargo port being built in Sochi for the Olympics.

"Not a particularly strong storm destroyed this important infrastructure project," he wrote.

"At least $14m [of work] was washed away by the sea, to say nothing of the lives of [three] seamen.

"And this serious catastrophe with the loss of human life is just the start of similar accidents which will follow," he warned. 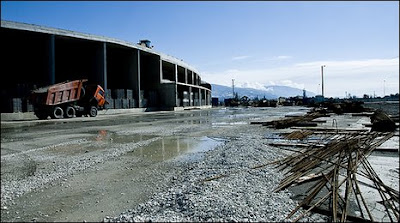 The Olympic stadium at Sochi is being built to tight deadlines

What happened at the port is evidence, Dr Volkov believes, of his worst fears coming true.

He had warned that it was not a suitable place for a port, but says he was ignored.

Now one of his biggest concerns is an $8bn (£5bn) project for a new road and rail link between Olympic venues being built on the Black Sea coast near Sochi and venues in the mountains.

It is supposed to be a centre-piece of the infrastructure development in the area.

Pile-drivers, cranes, bulldozers and cement-mixers are transforming a long, beautiful valley containing the Mzymta River into a frenetic industrial landscape.

It is one of the main reasons the Worldwide Fund for Nature (WWF) warned in February that "preparation for the Olympics is out of control, construction is of poor quality and vast damage to the environment has already been done".

But Dr Volkov's main worry is not for the environment.

He fears the builders are cutting a swathe through the valley up towards the mountains without taking into account how unstable the area is geologically.

He refers to a massive landslide in the late 1960s and warns there could be a repeat.

"The road is being built and tunnels dug in this same district," he says.

"This is seriously affecting the mountains."

Driving along the old road between the coast and the high peaks, we found an active landslide being cleared by excavators to protect traffic passing beneath.

Higher up next to the ski slopes Sergei Avdeev, mayor of Krasnaya Polyana - the village nearest the Olympic sites - told us he shared Dr Volkov's worries.

He said he had considered resigning over the issue.

"When the International Olympic Committee (IOC) awarded the games to Russia, they knew full well that Russia did not have enough time to do proper research and build all the facilities in line with international environmental and construction standards," he says.

"I pray to God that there will not be any consequences. The only thing we can do is pray and hope."

In answers e-mailed to the BBC, the IOC dismissed these concerns.

"Construction of the facilities, related infrastructure, and safety issues are the responsibility of the Russian organisers and the government," it said.

"We are confident in the research they did prior to the start of construction and the work they are undertaking now."

Allegations that corners are being cut in the rush to meet deadlines are also strongly denied by the main state-owned Olympic construction company, Olimpstroi.

"It's not a secret that Sochi has a very tough geological landscape," says Alexandra Kosterina, the main spokesperson.

"But all necessary research has been done... and we are building everything in line with international standards and with recommendations from the IOC."

The Sochi 2014 project is Russia's first experience of hosting the Winter Olympics.

The prestige of the country is at stake and it cannot afford to make any mistakes.
-- In pictures: Sochi Olympic preparations (Pics and text: Artyom Liss, BBC)
Gönderen CW zaman: 20:43