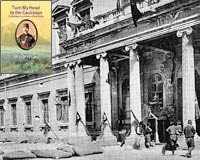 This file photo shows the Taşkışla barracks in İstanbul after artillery was fired by the Hareket Ordusu (Action Army) to suppress the March 31 Rebellion, which aimed to put an end to the Second Constitutional Era in the Ottoman Empire in 1909.
“It was the wedding anniversary from hell.” That was Peter’s summary comment in a recent e-mail.
As an anthropologist, he was in Dagestan with his Russian wife last month, researching the local people. Taking a break from work, they went into the town center in the evening for a celebratory anniversary dinner. While in the restaurant, trouble broke out between the local Free Dagestan militia and the Russian authorities. As they watched in horror from their table, sub-machine gun fire rang out throughout the streets -- some combatants even jumped on the hood of Peter’s jeep parked outside to get better cover.

Peter and his wife found themselves caught up in the turmoil and struggle that is the North Caucasus today. Terrorists? Rebels? Freedom-fighters? The definition you apply will depend on your view of the centuries-old conflict between the tribes of this region and the old empire of Russia. Peter and his wife will surely have some interesting stories to tell their children and grandchildren.

In “Turn My Head to the Caucasus,” Aydın Osman Erkan, the grandfather of popular Turkish presenter Rana Erkan Tabanca, recalls the stories told to him about his grandfather Osman Ferid Pasha. In the preface, he writes that it is the story of a family caught up in the upheaval and exodus of the North Caucasus war, saying that the tales he was told as a child were “perhaps romanticized, perhaps exaggerated, but [told] with such imagination, patience and enthusiasm [they] left a deep imprint on my mind and heart.”

“You must review this book, Marion”, said Gaye Hiçdönmez, a well-loved and hardworking member of the British Community Council (BCC) and proprietor of the former Four Seasons Restaurant popular with locals and tourists on İstiklal Caddesi by Taksim, as she browsed our books table at the BCC pantomime. So, on Gaye’s recommendation, I picked up my copy, to discover it comes highly recommended by another well-respected member of the British community in İstanbul -- Professor Norman Stone.

In Professor Stone’s commendation, he says, “‘Circassian’ is one of the great romantic names in history, and deserves to be. Tough and wily mountain warriors in the northern part of the Caucasus -- Circassia -- held off the Russians for forty years and then, in an epic of endurance, settled, in hundreds of thousands, in the territory of modern Turkey. This splendid book is the story of one of them, written up by his descendants.”

Osman Ferid Pasha’s story starts in the middle of the 19th century. Born to the chief of the Ubykh tribe, he grows up among a struggle for survival against hostile assailants and aggressors. In those days, Circassia was an independent confederacy of the Adyghe, Abhaz and Ubyhk peoples. But Russia wanted to possess the Caucasus to strengthen its approached to the Black Sea, and also the Baltic.

So, as a young boy, he learns through play the skills of mountain guerilla warfare. From the older boys he learns to swim in fast-flowing rivers, to jump from swinging ropes tied to a tree into the cold swirling waters below and how to maneuver a horse through rivers and flowing rapids. Janbolat, his father’s standard-bearer, takes charge of his military training. “In war in the mountains your best friend is your horse. … The forest is your camouflage, safety zone and war zone.”

“Oh the wild people who live in these countries,

Whose God is freedom and whose law is warfare,

Whose friendship is strong and revenge is stronger

These feelings are inflicted on them by their Lords in the sky.

They answer goodness with good and evil with equal evil,

And for them hatred is as eternal as love.”

The boy born into a leader’s family in the Caucasus becomes a member of the royal staff of the sultan in İstanbul and eventually rises to the position of general of the Imperial Ottoman Army, where his varied responsibilities include commander of the Taşkışla Barracks in İstanbul, envoy to Tripolitania in North Africa and overseer of the Medina Garrison, which meant he was also afforded the title of guardian of the Holy Shrine of Medina.

The skill of a historian such as Professor Stone is to show us how history has a bearing on modern life, society and politics. As Erkan relates the tale of his grandfather, he weaves sections describing the history and politics of the day with sections quoted from authors and observers and with Osman Ferid Pasha’s life story.

Sometimes the story seems to progress a little slowly, but in many places the pace picks up as the relevance to today’s geo-political climate in Russia and Turkey reaches a boiling point. The roots of today’s news from Grozny, Chechnya, Ossetia and Ingushetia extend back to Osman Ferid Pasha’s childhood, when Naqshibandi Shaykh İmam Shamil united the people under the banner of Islam to defend their land against Russian advance.

After the end of the Crimean War, Russia launched an aggressive military attack with three armies against Shamil and his Murid mountaineers in Chechnya and Dagestan. The young Osman Ferid becomes chief as his father dies defending their cause. His mother dies soon after, but not until she has made him promise to take his family to İstanbul. Osman Ferid’s tribe fights on, after many capitulated, and their desperate last stand includes protecting the refugees that streamed in. The tsar’s peace deal allows those who want to go to Turkey. Sailing in overcrowded schooners across the Black Sea, refugee boats take the four brothers to Constantinople (İstanbul), where they enroll in the military academy.

But a decade later, this great city is engulfed in tension and violence in the streets as the people wanted a new constitution, and the sultan seemed reluctant to grant their wishes. Again Osman Ferid’s story becomes uncannily modern. Promoted to major, he now holds a senior ranking position in the army, at a time when the minister of war was planning the first coup to overthrow a sultan. The minister of war was, of course, the commander general of the Ottoman army, and in the run-up to the bloodless coup, there were often heated exchanges in the officers’ mess.

“‘We are officers in the Ottoman Army, answerable only to our superiors. Our duty is to obey without question, so let’s not argue amongst ourselves but wait for orders.’

Mustafa, a close friend rejoined, ‘Osman Ferid, we cannot remain observers or be dogmatic at such a time; the scale of the political unrest in a country can lead to civil war and we should be prepared.’

Osman Ferid saluted him. ‘I believe the military forces to be above politics, as officers our duty is to carry out orders and remain silent. I advise you to do the same’. ”

Some 40 years later, after years of loyal service to his empire, Osman Ferid is once more confronted with the issue of politics, as the military commanders were impelled to swear an oath of allegiance, not just to their sultan and caliph, but also to the Committee of Union and Progress. “His reply was polite and honest. He would be honored to swear an oath of loyalty to Sultan Reşat Mehmed V, to serve him as a faithful servant, an officer of the Ottoman army and Sheikh-ul-Haram under the Caliph of all Islam, but it was against his principles, as an officer in the Ottoman Army, to swear an oath of allegiance to any political party.”

Osman Ferid’s life reminds us how topical history is! We shall have to see whether future news reports from the Caucasus and Turkey teach us that history teaches us nothing, or not.