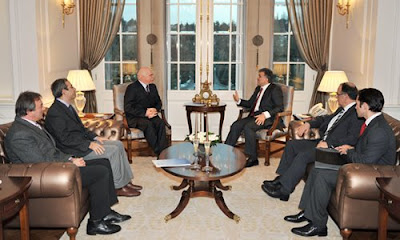 On January 5, the Turkish President Abdullah Gül, met with the Caucasian Associations Federation of Turkey (KAFFED).

In a pleasant atmosphere, KAFFED discussed concerns of the Circassian Diaspora. Some of the more poignant points included, direct travel to Abkhazia, prime time broadcasting in the Circassian language on Turkish Radio and Television (TRT) and including Circassian and Abkhazian language and literature in the University curriculum.

To read the file that was presented to President Abdullah Gül and additional articles, please click on the links below.