Chechnya: A long Struggle for re-Independence - Part 1 of 4 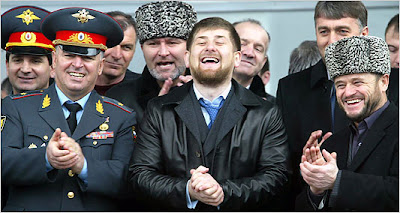 Ramzan Kadyrov, center, is the president of Chechnya. (Reuters)

Even as the Chechen freedom strugglers continue their fight for independence form Russian control, recently, a central avenue in Grozny the capital of Russia’s Chechnya region, seeking sovereignty back from Moscow, was named after Russian premier and former president Vladimir Putin, honouring the man who sent in troops to crush a freedom rebellion there. Currently a pro-Russia regime is ruling Chechnya Republic with instructions from the Kremlin. Previously called Victory Avenue, a common Soviet-era name, it is now called 'Prospekt Putina', or Putin Avenue. Footage broadcast on Russian television showed bands of teenagers carrying the Chechen green, white and red flag along the avenue, which was lined with large portraits of Putin. Grozny mayor Khuchiyev was quoted as saying by Interfax news agency: "This act is in recognition of Putin's outstanding contribution to the fight against terrorism, and to the economic and social restoration in the Chechen republic". Like USA & many other powers so in the world, Russia has indeed has made a lot pro-Moscow agents among the Chechens. Like the US-led west, Russia has used terrorism plank to silence majority of Chechens.
Belongling to SE European Russia in the N Caucasus, Chechnya declared independence from Russia after the break-up of the Soviet Union in 1991. In 1994 Boris Yeltsin dispatched Russian troops to the republic in the north Caucasus to restore Moscow's control, but after two years of fighting predominantly Islamist rebels defeated them, establishing a de facto independent state. In 1999, however, the “enrgetic” prime minister, Vladimir Putin, sent troops in again to recapture the separatist region, laying siege to the capital Grozny. The offensive succeeded, with the Kremlin installing a former rebel leader, but who agreed to be pro-Russia, Akhmed Kadyrov, to head a pro-Moscow administration. His son, Ramzan, took over after Kadyrov was assassinated in May 2004, with Putin making him Chechnya's president in February 2007. Estimates of the number of civilians killed or missing in both Chechen wars range from tens of thousands to hundreds of thousands.
The mountainous region has important oil deposits, as well as natural gas, limestone, gypsum, sulfur, and other minerals. Its mineral waters have made it a spa center. Agriculture is concentrated in the Terek and Sunzha river valleys. Oil, petrochemicals, oil-field equipment, foods, wines, and fruit are produced. The population, which is concentrated in the foothills, is predominantly Chechen, or Nokhchi. The Chechen, like the neighboring Ingush, are Sunni Muslim, and speak a Caucasian language.
According to the 2004 estimates, the population of Chechnya is approximately 1.1 million. Most Chechens are Sunni Muslim, the country having converted to that religion between the 16th and the 19th centuries. Most of the population follows either the Shafi'i, Hanafi, or Maliki schools of jurisprudence.The Chechen attempts to achieve independence is never ending and are pretty hopeful of their exit from the Kremlin fold with or without support from the so-called democratic world led by USA. Their independence struggle led Russia to invade Chechnya and defeat the breakaway republic, while imposing a government favored by Russia, but unwanted by the Chechen people. Indeed, it was partly the Islamic upsurge of Chechen society that was considered by Moscow as a threat and led to the Second Chechen War. Patriotic Nationalists are still convinced about the righteousness of their cause and are unwilling to submit to Moscow. Their strongholds in the mountainous areas of Chechnya have not been defeated. As expected by the Kremlin, the so-called patriotic nationalists may be down, but are only waiting for their chance to come back and may become more radical as their isolation worsens.
Brief History of Chechnya