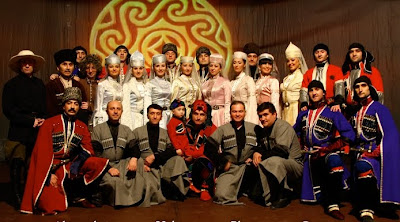 NatPress - Authors of the dancing show “Circassian circle” invite all the inhabitants and the visitors of Adygeya capital! Only one day in Maykop!

On September, 30th at 7-00 p.m. in the State philarmonic society of Adygeya Republic (Maykop, Pionerskaya street, 300) there will be the dancing show "Circassian circle" in which spectators could see created at the high-professional level and with love the image of Adygs and the peoples of the whole Caucasus in an original interpretation with using the modern technologies. Information by phones 53-12-77, 53-46-01.

The dancing show "Circassian circle" in Maykop! The show comes to its end, and it becomes close on the stage: tens spectators come to the actors to thank them personally. Inhabitants of the republic “Circassian circle” were touched in the part of their hearts which is given for ever to the small native land, to the ancestors and to what the ancestors bequeathed to new generations. That was the end of the short, but the triumphal tours which had marked the first anniversary of "Circassian circle”.

The unusual folk-show had been already seen in Adygeya, Karachaevo-Circassia, Moscow and St.-Petersburg. In Cherkessk the applause lasted nearby half an hour. And in the northern capital the youth, not having remained sitting in the hall, started storming the stage, wishing to participate in the incendiary dancing. Nalchik citizen Robert Saralp gave his compatriots a unique opportunity during the show to feel as an integral part of the one and huge world civilization. “ Not a people - neither numerous, nor small - can survive alone in the modern world. We are all a part of the world community, and only through the universal prism we should look at what was, what is and what will be to my people. My people is a part of the mankind”, - the author of "Circassian circle” explained the idea that has begun the project to which he been going long enough.

The graduate of well-known "Schuka" Robert Saralp, the actor of drama theatre and cinema, he played the leading roles in Shoghentsukov’s theatre. But he really found himself in the genre, apparently, alien to the Caucasian mentality - clowning, having organized in 1991 the legendary troupe "Butterfly". The main clown of the world Vyacheslav Polunin invited him to the well-known “Snow show” that blown up the theatre life and travelled triumphally around the world for more than 10 years.

Polunin entrusted the star role to Saralp, who also became the diplomaed director. It was already the second season “the yellow clown” in Robert's performance collects notices on the Broadway. “Snow show” is the sweetest ode to loneliness in the world without borders. And only true clown can talk to the world in the universal language - the language of love, beauty and pleasure, not demanding additional explanatories. That inspired Robert to creation of "Circassian circle”.

The name “Circassian circle” was thought up by no the project’s founders at all. The dance with such a name was popular in Europe in the XVIII century and was considered quite secular. In many countries it is remembered so far though in the course of time it lost similarity with the dances of Circassians and has another name.

Costumes of Madina Saralp specially made for the show, remind of everything in the world - ballet clothes, theatrical requisite, fancy and ball dresses. But a Kabardian would not doubt that somebody from among his ancestors … could wear all of that.

The unusual footwear for the performers was made by Nalchik citizen Aslan Kerefov; the stylized Circassian hats for mountain men – by Svetlana Kholmanova, and the well-known master of the national ornaments Vyacheslav Mastafov incurred creation of the accessories.

Composer Anzor Uvizhev created a surprising music. It is the music of a mountaineer knowing both the folk melodies of the whole world and the classics, as well as jazz and blues. A mountaineer who understands how men of various people can talk to each other, not saying a word. Understands what feelings the mountains’ music causes in somebody’s soul, whether it were the tops of Scotland, Mexico, Caucasus …
Gönderen CW zaman: 16:42