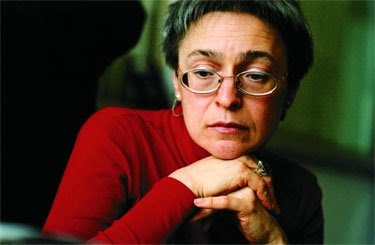 By Colin Freeman - Telegraph - 25 June 2009 - Russia's Supreme Court has ordered a retrial of three men acquitted of involvement in the murder of Anna Politkovskaya, the campaigning journalist and Kremlin critic.

The defendants, who were cleared in February after a four-month trial, will face a new jury before the same Moscow district military court, officials said.

The reasons for the retrial were not immediately given. However, the failure so far to put any of Ms Politkovskaya's killers behind bars so far has been a diplomatic embarrassment for the Kremlin, which itself was accused by human rights groups of having a hand in the assassination.

"The supreme court has annulled the innocent verdict on the case of the murder of Anna Politkovskaya," said supreme court spokesman Pavel Odintsov. "The case will be examined again with new jurors."

Ms Politkovskaya was gunned down in the entrance to her central Moscow apartment block on October 7, 2006, in a killing which drew worldwide attention.

She had written widely about human rights abuses in Chechnya, and had been highly critical of Vladimir Putin, who was president at the time and is now prime minister.

During the trial, Chechen brothers Dzhabrail and Ibragim Makhmudov were accused of driving the gunman to the crime scene, while Sergei Khadzhikurbanov, a former police investigator, was charged with providing logistical back-up. Pavel Ryaguzov, a former agent of the FSB security service, was accused of attempting to extort money in a related aspect of the case, and was likewise acquitted in a separate trial.

Prosecutors alleged that Politkovskaya's assassin was a third Makhmudov brother, Rustam, who they claim has now escaped abroad. The original trial shed little new light on the circumstances of the killing.

A lawyer for the Politkovskaya family, Anna Stavitskaya, said the family did not support the annulment of the verdicts.

"They were completely in agreement with the acquittal verdicts, we did not regret this and we think there is no foundation for their annulment," she said.

Politkovskaya, who worked for the Novaya Gazeta newspaper, penned a book called "Putin's Russia," accusing Mr Putin of presiding over serious rights abuses in Chechnya, and using the conflict there as a justification for his own authoritarian style.

Her killing took place shortly before the murder in London of former FSB spy Alexander Litvinenko, and added to escalating diplomatic tensions between Moscow and the West. It was cited by human rights campaigners as a sign that the Kremlin was no longer prepared either tolerate or protect dissident voices. Kremlin officials have denied suggestions that they wished to see her silenced.

After her murder, Mr Putin called for Ms Politkovskaya's killers to be punished, but also described as "extremely insignificant" her ability to influence political life in Russia.
Gönderen CW zaman: 16:12