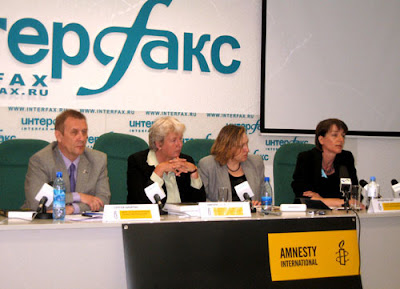 The section named "Russia" in this year's report on human rights worldwide of the Amnesty International (AI), the largest international independent human rights organization, dealt mainly with the situation in Northern Caucasus. This was reported by Frederica Behr, an AI's researcher.

According to the report, the information arriving to the AI evidences that the situation in Northern Caucasus remains instable, and violence was incessant especially in Chechnya, Ingushetia, Dagestan and Kabardino-Balkaria.

Armed oppositional groupings were responsible for deaths of dozens militiamen and local power officials in Dagestan, Chechnya and Ingushetia, as stated in the report.

Messages arrived about voluntary detention and torture of people, cruel treatment and extrajudicial executions committed by law enforcers in Chechnya, Dagestan and Ingushetia. Experts of the Amnesty International were anxious about low efficiency of investigations into such facts, which gave rise to general impunity.

The authorities kept prosecuting independent journalists, mass media and NGOs for disseminating information about violations of human rights; therefore last June the Parliamentary Assembly of the Council of Europe made a decision to continue monitoring the situation in Northern Caucasus.

Ms Behr said to the "Caucasian Knot" correspondent that attempts to retrieve information about Northern Caucasus are associated with permanent difficulties and unwillingness of local authorities to cooperate in these issues.