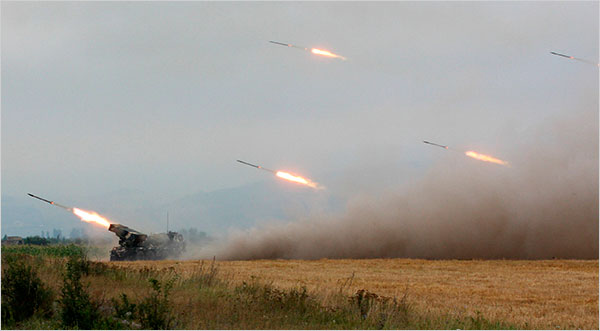 The New York Times has published an article which questions Georgia's account of the conflict in South Ossetia in August this year. Based on the observations of OSCE monitors, it reports that Georgia was not acting defensively, but started the shelling of civilians in the South Ossetian capital, Tskhinval.
"The accounts suggest that Georgia's inexperienced military attacked the isolated separatist capital of Tskhinvali on August 7 with indiscriminate artillery and rocket fire, exposing civilians, Russian peacekeepers and unarmed monitors to harm," says the New York Times report.
This was a report rumoured to exist about two months ago by the German magazine Der Speigel. It was then officially denied by the OSCE and now apparently is being 'undenied'...

In late August and September 2008, the respected German weekly Der Spiegel published several articles which also cast doubt on the Georgian version of events in South Ossetia: "The Chronicle of a Caucasian Tragedy" and "The West Begins to Doubt Georgian Leader". These articles suggested Saakashvili's NATO ambitions were among the main reasons behind the attack.

Earlier this month, the BBC broadcast the first unrestricted Western report from South Ossetia. Its coverage suggested Georgia could have committed war crimes in the region.