Far right goes on rampage during anti-immigrant clashes in Moscow 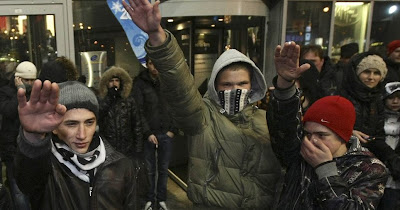 Many of the demonstrators shouted nationalist slogans and gave Nazi salutes.
By Shaun Walker in Moscow - The Independent
Police detained around 1,000 people in central Moscow yesterday in an attempt to contain ethnic tensions between Russian nationalists and migrant workers – sparked by the killing of a football fan – from flaring into pitched street battles.
Thousands of riot police patrolled locations across the city, including the Kiev Station, where there were rumours that a massed fight could take place between the two groups. Police checked documents and confiscated knives and other weapons, calling on the crowds to disperse and detaining anyone who disobeyed orders, herding them into waiting buses.
The Russian capital has been tense since the weekend, when protests over the murder of Yegor Sviridov, a Spartak Moscow football fan, turned violent. Mr Sviridov was killed earlier this month, allegedly shot dead by a native of Russia's troubled, mainly Muslim, North Caucasus region.
On Saturday, thousands of football fans and nationalists packed Moscow's Manezh Square, near the Kremlin, and began attacking anyone of a non-Slavic appearance. In terrifying scenes, riot police had to tell bloodied victims to hide under cars as they fought off the angry mob and waited for reinforcements. After the fighting on the square was brought under control, mobs of youths entered the metro system, and proceeded to pull people who looked non-Russian from trains and assault them on the platform. Dozens were injured.
Yesterday, nationalist groups said they were planning to meet again, while the Russian blogosphere had been awash with rumours that hundreds of Chechens and other natives of the North Caucasus were travelling to Moscow to exact revenge for Saturday's attacks. The fear was of a clash between two heavily armed gangs bent on revenge.
In the end, while the police detained hundreds, there was little in the way of fighting. Groups of nationalists shouted "Russia for Russians!" and "Moscow for Muscovites", while scuffles broke out at various locations across the Russian capital. But the serious battles that had been expected did not materialise, and most of those detained were released shortly afterwards.
The situation in the Russian capital remains tense, however, with nationalist leaders using rhetoric designed to stoke tension. "Today Moscow is a dangerous city, mainly due to immigrants from the North Caucasus and Central Asia," said Alexander Belov, a nationalist figurehead who formerly led the Movement against Illegal Immigration. "Russia is now a battleground. If you go out unarmed, you have minimal chance of surviving. I call on every Russian to carry a gun or at least a knife – not to do so is an act of criminal irresponsibility."
President Dmitry Medvedev has called for order and promised that those provoking riots will be punished.
Source: The Independent
Related Issues
Gönderen CW zaman: 11:23