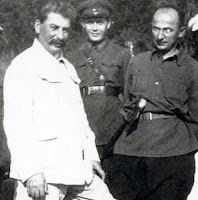 June 2010 - Special to Abkhaz World
Background
In the period 1922—1930 Abkhazia enjoyed the status of a union republic associated with but not subordinate to Georgia. On February 19, 1931 the Sixth All-Georgian Congress of Soviets decided, presumably with Stalin’s consent, to deprive Abkhazia of this status and incorporate it into Georgia as an autonomous republic. In several Abkhaz villages there were mass protests against this change as well as against forced collectivization, then underway across the Soviet Union. Georgian leader Lavrenti Beria mobilized a security police detachment to suppress the protests, but Nestor Lakoba, the first leader of Soviet Abkhazia, managed to defuse the confrontation and avert bloodshed.
The result was that Abkhazia retained substantial de facto autonomy for another five or six years, although Lakoba now needed to make frequent visits to Tbilisi to consult with the Georgian leadership. By referring to the special conditions prevailing in Abkhazia, he was able to halt collectivization, avoid carrying out purges, and even distribute financial allowances to Abkhaz princes and nobles. In these respects, Abkhazia found itself in a uniquely protected position at a time of general upheaval.
Murder of Nestor Lakoba and subsequent purges
This idyll came to a sudden end with the death of Nestor Lakoba in December 1936, ushering in the period of repression that I refer to as the Stalin—Beria terror. The cause of Lakoba’s death has never been formally established, although historians acknowledge that he died under suspicious circumstances. However, various oral versions have survived. In an interview given by the famous Abkhaz writer Fazil Iskander, the interviewer suggests that Beria summoned Lakoba to his office and shot him right there, but Iskander rejects this version:
No, no, he was poisoned by Beria! What do I know? An order came from Beria that Lakoba should report to him in Tbilisi.. Nestor Apollonovich usually went to Tbilisi with his wife, but on this occasion he refused to take her with him—apparently he understood that things were difficult there. He arrived in Tbilisi, and on the very first day he and Beria had a vicious row at the offices of the Georgian Central Committee. [According to historian Stanislav Lakoba, Beria presented Lakoba with a plan to resettle peasants from Western Georgia in Abkhazia, which Lakoba refused to implement—SDS] Lakoba returned to his hotel room. After a while the telephone rang. It was Beria’s wife Nina, or perhaps Beria’s mother. “Why are you and Lavrenti quarreling, Nestor? You are friends, after all. Come to our place, we’ll dine together.” So she persuaded Lakoba to come. I’m sure she knew nothing of Beria’s intention. When they met, Beria handed his “friend” a glass of poisoned wine. After the meal Beria and Lakoba went to the theater, where Lakoba felt unwell, stood up, and headed for the exit. On the street he told his chauffeur in Abkhaz: “They’ve killed me!” He repeated these words a number of times, evidently already feeling the effect of the poison. Hardly had he reached his hotel room when he lay down and died. Some time—half an hour or an hour—later Beria turned up at the hotel...
I was a little boy at the time and vaguely remember how it was declared that Lakoba had died of a heart attack or something of the sort. His body was brought to Abkhazia, but Lakoba’s wife was a very courageous woman: knowing of the difficult relations between her husband and Beria, she called in her physician, who determined that Lakoba had been poisoned. Then she asked the physician to go to Moscow and inform [the Kremlin] of the cause of Lakoba’s death. The physician set off, but on the way he was intercepted and taken to Sochi. After that all trace of him is lost. Evidently he was either shot right away or jailed.
After that there began in Abkhazia [show] trials like those taking place in Moscow. It was Beria’s intention that Lakoba’s chief accusor should be his own wife. The chief accusation against him was that he had been a Turkish spy. [Lakoba’s wife was of Turkish origin—SDS] But Lakoba’s wife, despite every kind of torture, would not betray her husband, so she never appeared in court. She went insane from the tortures and died in jail.
They had a son. He was immediately arrested. When the war began, he wrote Beria a letter: “Uncle Lavrenti, let me out of jail and I’ll go to the front.” Beria is said to have responded: “What? Is he still alive?”—and gave the order for him to be shot.1 Read all article... (AW)
Gönderen CW zaman: 11:10