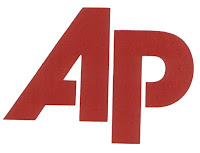 ''The Associated Press (“AP”) is the essential global news network, delivering fast, unbiased news from every corner of the world to all media platforms and formats.''
This excerpt comes from AP’s ‘About Us’ section.

Goethe said once: ''I can promise to be frank, but not to be impartial''. Usually people are expects neutrality, unbiased news from the media organizations but usually it’s not happens and actually that is not all wrong - IF its including honesty… Yes, media organizations also can be partial but the most important thing is to become partial with honesty and CONSISTENCY.
Please see below a letter sent to AP editors FIVE times but unfortunately without any reply. Draw your own conclusions...

In this letter you will see a very good example of AP’s bias in their news-reporting.
If you also would like to show your reaction, you can send a letter to: apfeedback@ap.org; info@ap.org
---
Dear Editor,
I am writing to express concern with regard to the newly published news ''Vladislav Ardzinba, Once Led Abkhazia, Dies at 64'' (March 5, 2010) (AP)
I should note that the North Caucasians who came to the defence of Abkhazia when Georgia attacked in August 1992 were volunteers, organised by the Confederation of the (Mountain) Peoples of the Caucasus under its president Yuri (Musa) Shanibov. Ardzinba did NOT call in Chechen mercenaries. It is true that some of the volunteers (notably the Chechens) earned a fearsome reputation, but, after all, war is war...

As for the organising of ethnic cleansing, quite the opposite is true. See the condolence-message written by George Hewitt on 4 March. And HERE you can see the copy of the leaflet distributed just before the end of the war urging civilised treatment of soldiers laying down their arms or the non-combatant population; It’s included Prof. George Hewitt’s article in 'Transcaucasian Boundaries'.

The 2nd UNPO report from the end of 1993 said that the majority of Georgians who left did so BEFORE the arrival of the Abkhazians, (See: 'THE MAJORITY OF GEORGIANS, HOWEVER, FLED BEFORE ABKHAZIAN AND NORTHERN CAUCASUS TROOPS ARRIVED.' [Report of a UNPO Coordinated Human Rights Mission to Abkhazia and Georgia, p.13] AND a UN Security Council report (17 November 1993, S/26795 ) on the basis of its own investigation of ethnic cleansing charges from November 1993 stated that there was no evidence to support the charge.

It also occurs to me that, if one wants to talk about the role of Chechen mercenaries in Abkhazia, one should be talking about the recruitment by the GEORGIAN authorities in October 2001 (i.e. in the time of Shevardnadze, still supported by the West, including the USA) of Ruslan Gelaev and his band. They were transported across Georgia in Kamaz trucks from the Pankisi Gorge and infiltrated into the Upper Kodor Valley. From there they mounted an attack, notably on the Armenian-populated village of Naa. Overall some 40 people were killed, and a UNOMIG helicopter was shot down, with the loss of 9 lives. Now that's real mercenary activity!
And the second point is about the partly recognised states.
There is no surprise that 'Sukhum' (Abkhazia) was represented as part of Georgia in your news: ''Vladislav Ardzinba, Once Led Abkhazia, Dies at 64''
SUKHUMI, Georgia (AP) —
I think it is still necessary to note that Abkhazia has been recognized by four members the United Nations, namely Russia, Nicaragua, Venezuela and Nauru.
I would like to ask, what about Kosovo? Is ASSOCIATED PRESS using this title ''PRISTINA, SERBIA''? Or prefer to use ''PRISTINA, KOSOVO'' ? Or only PRISTINA?
See: ''EU Police in Kosovo Arrest Alleged Hit Man'' PRISTINA, Kosovo November 30, 2009 (AP)
More examples can be found.
What about TAIPEI?
See: ''Poll Setback Tests Taiwan's China-Friendly Leader'' TAIPEI, Taiwan February 28, 2010 (AP)
I personally have NO objection to the independence of Kosovo or Taiwan, but the question that troubles me is the different treatment of partly recognised states.
Kosovo is recognized by 65 members of the International Community, Taiwan is recognized by 22 countries, Abkhazia is recognized by 4. Given this, and I am sure you have some scheme to corroborate these figures, might I ask what the criteria are for the ASSOCIATED PRESS to present a state as a state?
What precise number of recognitions will be necessary before Abkhazia has earned the right to be represented as an independent country not related to Georgia?
Let me note that Georgianisation of Abkhazia's toponymy was introduced at the time of Stalin (who, as I'm sure you know, was Georgian). This was the time of immense discrimination against the Abkhazian population, including the reduction of the status of Abkhazia to that of an autonomous republic within Georgia. If the ASSOCIATED PRESS still recognizes Stalin's toponymy within Abkhazia, consistency would demand that it use the same Stalin-imposed names for the rest of the former Soviet countries with, for example, Stalingrad instead of Volgograd or Gorky instead of Nizhny Novgorod in Russia, or Zhdanov instead of Mariupol in the Ukraine, or Tskhakaya instead of Senaki in Abkhazia's neighbouring Mingrelian in western Georgia, or other names of numerous Soviet leaders and dictators of that time.
Kind regards,
Metin Sönmez
CircassianWorld.com & AbkhazWorld.com
Admin
PS. >> Historical Maps: Abkhazia at various times in history
http://gallery.abkhazworld.com/#4.41
The maps included here give an idea of the frontiers of Abkhazia at various times in history. The Abkhazians call their capital /Aqw'a/, but it is more usually known in other languages as Sukhum (Sukhum-Kalé or Sukhum-Kaleh in the period of Turkish influence along the Black Sea's eastern coast; /soxumi/ in Georgian). The ending -i in the form /Sukhumi/ represents the Georgian Nominative case-suffix, and it became attached to /Sukhum/ from the late 1930s when Stalin (Ioseb Besarionis dze Jughashvili) and his Mingrelian lieutenant in Transcaucasia, Lavrent'i Beria, began to implement a series of anti-Abkhazian policies. Abkhazians today, for obvious reasons, resent the attachment of this element from the language of a people they see as oppressors.
Gönderen CW zaman: 18:05