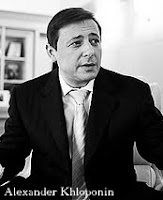 Aleksandr Khloponin was the governor of Krasnoyarsk region in Siberia until the very moment of Medvedev’s announcement. Khloponin is also set to receive the rank of deputy prime minister after adjustments are made in Russian law. Medvedev emphasized that Khloponin was appointed primarily to coordinate the economic development of the new federal district. The city of Pyatigorsk in Stavropol region is to become the center of the newly established federal district (www.rutv.ru, January 19).

The Republic of Adygea, the western-most republic in the Northern Caucasus, did not become a member of the new federal district. At the same time, the Stavropol region, a large but sparsely populated Russian-speaking region that has common borders with all of the region’s republics except Adygea and Ingushetia, was included in the newly formed district.

The North Caucasus Federal District will be the eighth federal district in the Russian Federation. This comes as the first change of the institution of federal districts and Russian presidential plenipotentiaries since President Vladimir Putin introduced it in May 2000.

The Kremlin has persistently tried to amalgamate the North Caucasian republics into Russian-speaking regional formations and even tried to get rid of the very term “North Caucasus,” renaming the original North Caucasian federal district as the Southern Federal District in June 2000. In striking contrast to the previous policies, Medvedev’s move defines the administrative borders of the Northern Caucasus Federal District almost strictly along the ethnic republics boundaries.

The personality of the new governor of the North Caucasus also represents a remarkable novelty in Moscow’s political approach toward the region. A member of the United Russia party, Alexander Khloponin is known not only for being the governor of the economically developed Krasnoyarsk region in the heart of Siberia. He is also known for his links to Russian oligarchs like Vladimir Potanin and Potanin’s Interros business structures. Before going into politics, Khloponin led the Norilsk Nickel plant from 1996 to 2001. Krasnoyarsk is the second largest region in Russia, comprising one-seventh of Russia’s territory. Khloponin’s methods of management are said to be somewhat sporadic as he tries to spend a good portion of his time in his home-city Moscow, where his family resides on a permanent basis (www.flb.ru, February 4, 2008). Khloponin has no widely known links to the North Caucasus. However, since he became the governor of Krasnoyarsk region in 2002, he oversaw a successful amalgamation of two ethnic autonomies, the Taimyr and Evenk autonomous districts, into Krasnoyarsk region, an experience that might be valued in the Kremlin.

President Medvedev announced his decision to appoint his special representative in the North Caucasus during his state of the nation address on November 12, 2009. Medvedev cited the need to resolve what he called the single greatest internal problem of the Russian Federation –the precarious security situation in the North Caucasus. Ramzan Kadyrov, Dmitry Kozak, Vladislav Surkov, Arkady Yedelev and Sergei Ivanov were mentioned in the press as possible candidates. An anonymous source in the Russian government confirmed for Gazeta.ru that the message Moscow was trying to give to the public through Khloponin’s appointment was that Moscow was “abandoning” its reliance on force in its North Caucasus policies. Khloponin is also said to have close relations with both President Medvedev and Prime Minister Putin (www.gazeta.ru, January 19).

Medvedev has stated on several occasions that the North Caucasus region has to be economically developed in order to undercut the spread of Islamic extremism and to stabilize the region. However, mere changes in the personalities of governors and reshuffling the administrative boundaries may be insufficient measures in the troubled region. Also, it appears that major hawks, like the Deputy Interior Minister Arkady Yedelev, who is in charge of counter-terrorism operations in the North Caucasus, remain in office. Human rights defenders have regularly accused Russian law enforcement agencies of violating human rights and thereby contributing to the spread of extremism.

Both moves –the creation of a new federal district in the North Caucasus and appointing the governor of Krasnoyarsk region to head it– took most observers by surprise. Human Rights Watch’s expert Tatyana Lokshina said in an interview with the Polit.ru website that her impression was that the position of the president’s representative in the North Caucasus has become an intermediary stop for various bureaucrats, where they have to wait for their next appointment. According to Lokshina, Khloponin is better than the current head of the Southern Federal District, Vladimir Ustinov, but has insufficient expertise in the North Caucasus to be a successful governor.

Alexander Cherkasov of the Memorial human rights center cautiously welcomed the appointment as an indicator of a greater emphasis on economic development of the North Caucasus (www.polit.ru, January 19). The editor-in-chief of the liberal Russian radio station Ekho Moskvy, Aleksei Venediktov, expressed his skepticism about both Medvedev’s decisions. He pointed to Khloponin’s manifestly low authority to manage local leaders like Chechnya’s Ramzan Kadyrov and Ingushetia’s Yunus-bek Yevkurov and the arbitrariness of including a Russian speaking-region, Stavropol, in the new federal district, while excluding an ethnic republic, Adygea, from it (Ekho Moskvy, January 19).

The creation of the North Caucasus Federal District will make it easier for Moscow to focus on the tasks that are specific to the region. At the same time, increasing horizontal cooperation between the North Caucasus republics will be watched with unease by the more nationalist-minded people in the Russian government. Khloponin seems to be a compromise figure between the Putin and Medvedev teams and he may be, as several commentators speculated, a temporary figure.
Gönderen CW zaman: 11:47