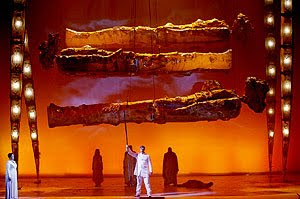 From The Economist print edition - by Natasha Razina

EVEN at the heart of the Richard Wagner cult in Bayreuth, it takes nine days to stage the German composer’s four-part epic, “Der Ring des Nibelungen”. The demands on the leading singers are so great that after the curtain falls on the first piece, “Das Rheingold”, there are breaks of at least 40 hours between the three other parts: “Die Walküre”, “Siegfried” and “Götterdämmerung”.

But the Russian Mariinsky Theatre has produced a version for people in a hurry. By double-casting the principal roles, with singers such as Leonid Zakhozhaev as Siegfried and Mlada Khudoley as Sieglinde, all home-grown talents from within the Mariinsky, it offers you total immersion over four evenings. This cycle was first shown in St Petersburg in 2003 and has since appeared in New York, Los Angeles, Tokyo, Seoul and at the Millennium Centre in Cardiff. After a second relaunch of the cycle in St Petersburg, the doyenne of Russian music, Lilian Hochhauser, brings the marathon to London’s Royal Opera House (ROH) later this month.

Conceived by the Mariinsky’s powerful conductor, Valery Gergiev, with George Tsypin designing, the production has the distinction of being “Russian”. Its principle features borrow heavily from the mythology of the Caucasus region, from where Mr Gergiev hails. But the staging has notably failed to draw the rave reviews that the Mariinsky has come to expect from its productions abroad. Having suffered a series of defections, including as many as four directors, it was coolly received at Cardiff in 2006, where critics labelled it “lifeless” and complained of “unidiomatic singing” from the all-Russian cast. Will the production work better this time round?

In its first incarnation, even America’s diehard Mariinsky fans had reservations. Describing the sets and costumes as “cheap and tacky”, the New York Times wondered if the “rubbery battle shields” had been found “in the Halloween costume bin at Wal-Mart”. Mr Gergiev went on to blame the failure in Cardiff on the “horizontal shape of the proscenium”. But the inescapable fact is that his “Ring” was assembled haphazardly and had something of a false start.

Johannes Schaaf, Mr Gergiev’s first choice to direct the whole cycle, withdrew after “Das Rheingold” in 2000. Mr Schaaf’s designer, Gottfried Piltz, then directed “Die Walküre”. Unsatisfied, Mr Gergiev decided to start again from scratch. Enlisting Mr Tsypin, he then unveiled a “Ring” he describes as “iconic but simple, and free of the conceptual approach of so many German productions”. But his decision now to engage yet another director—24-year-old Alexander Zeldin—suggests that he is aware of a dramaturgic vacuum at the centre of this production.

Born to an Australian mother and Russian-Jewish father, Mr Zeldin attended Oxford, was influenced by Peter Brook and Robert Lepage, and travelled widely in the Middle East to learn about theatre production and performance there. He gave an “Egyptian” makeover to Pedro Calderón de la Barca’s 1629 historical comedy, “The Constant Prince”, that was acclaimed in both Cairo and at London’s Arcola theatre.

Mr Zeldin’s adoption into what he calls the “Mariinsky family” began in 2007 with the Russian premiere of a well-known contemporary opera, “Powder Her Face”, by Thomas Adès, a British composer. Impressed, Mr Gergiev handed Mr Zeldin new productions of “L’Heure Espagnole” and “Gianni Schicchi”.

For the “Ring”, Mr Zeldin has been invited “to provide focus and drama”. New video installations by Sven Ortel add welcome scenic relief to the production, but Mr Zeldin was nevertheless obliged to take on the old set, which is dominated by four 12-foot-high giants, the primordial gods of Ossetian mythology.

He is excited by the challenge. According to Mr Zeldin, the Caucasian gods and their Nibelungen equivalents have a lot in common. “Wotan bears a striking resemblance to the Nart god, Warzameg, who is betrayed as both leader of the Nart gods and as their most fallible man,” he explains. He also sees other parallels. “Wagner was writing during the industrial revolution, when man first attempted to control circumstances that exist beyond nature,” says Mr Zeldin. “Today science is driving us further: in the DNA era we are inventing things that are beyond our comprehension, so the very business of being human is under threat.”

Mr Zeldin wants the first night to be a surprise. For London audiences he will reveal only that Nibelheim is a “factory producing clones” and Valhalla a “laboratory”. This Rheingold is more than just another lump of gold, he says; it is an example of the fabric of the natural world, designed to look like “fleshy tissue, a beautiful living organism in the water”.

Ms Hochhauser need not worry about difficult concepts—the cycle, which begins on July 29th, is virtually sold out despite the recession and a top ticket price of £840 ($1,380). The event represents a professional rapprochement with Mr Gergiev. The two fell out when Ms Hochhauser rejected Mr Gergiev’s commercially unsafe choice of an all-Shostakovich programme for the ROH. Vindication came quickly. Mr Gergiev took his season to the English National Opera in 2006 with financially disastrous results. In the Mariinsky’s place Ms Hochhauser invited the rival Bolshoi for a sold-out and critically triumphant season of popular opera and ballet. Whether the gods will smile on their newly remade friendship effort remains to be seen.
Gönderen CW zaman: 16:45