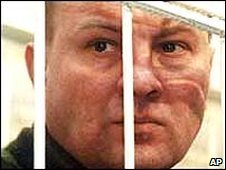 The first Russian army officer to be prosecuted for killing a civilian during the conflict in Chechnya is set to leave jail 15 months early.
A court in the south Russian province of Ulyanovsk granted a petition for early release made by Yuri Budanov, who has been in custody since early 2000.
He was jailed in July 2003 for 10 years for murdering Kheda Kungayeva, 18.

Budanov confessed to strangling the woman in 2000, saying he had acted in a fit of rage while interrogating her.

The former officer, who was subsequently stripped of his rank and military decorations, claimed temporary insanity, saying he had suspected his victim of being a sniper.

But the judge at his trial ruled that he had been of sound mind at the time of the killing and found him guilty of kidnapping, murder and abuse of power.

On Wednesday, the municipal court in Dimitrovgrad, where Budanov is serving his sentence, ruled that he should be released because he had repented of his crime. He is expected to be freed within 10 days.

The Russian news agency Interfax reports that the human rights ombudsman in Chechnya, Nurdi Nukhazhiyev, has protested against the court's decision, accusing Russian judges of "double standards" with regard to Russians and Chechens.

The Budanov case has been widely seen as a test of Moscow's determination to crack down on alleged human rights abuses by Russian troops in Chechnya, correspondents say.

Chechnya was brought under Moscow's control again in 1999 after a brief period of separatist rule.